These processes are summarized below, and shown in the figure. 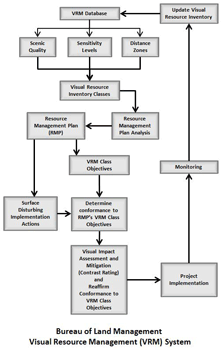 The overall BLM policy direction for VRM is contained in BLM Manual 8400 - Visual Resource Management (Issued 1984, 15 pp). Manual 8400 describes the purpose and objectives of the VRM system, BLM's authority to administer the VRM program, and individual responsibilities for VRM administration. It also states BLM policy with respect to VRM, and provides a brief overview of the VRM system.

The BLM's VRI is a systematic process for:

VRM class objectives are applied to spatially delineated visual management units designated for all BLM public lands during the land use planning process. Each VRM class objective is definitive, authoritative, and measurable. They establish the thresholds of allowable visual change to the landscape character and set forth the criteria to which land use authorizations shall conform. These area-specific objectives provide the standards for planning, designing, and evaluating future management actions when implementing the land use plan.

The VRI serves as the principal consideration when making VRM decisions that may protect or affect the landscape character and its scenic integrity during land use planning. The inventory values are considered in combination, as a unit (VRI classes), and independently (individual factors of scenic quality, sensitivity, and distance zones) when evaluating land use plan alternatives and making land use plan decisions.

Decisions on VRM class objectives also take into consideration other resource values that have management objectives that may or may not coincide with the protection of visual resources. Designating the appropriate VRM class objectives results from a coordinated and detailed examination of opportunities to protect visual values that also accounts for other program directives that require protective visual management of sensitive resource values while also aiming for compatibility with resource use and development allocations.

The VRM Class I management objective is to preserve the natural character of the landscape, and minimal visual change from human activities is allowed. VRM Class II and III lands allow progressively greater amounts of visual change to the existing landscape, while VRM Class IV lands provide for management activities which require major modification of the existing character of the landscape, and the level of change to the characteristic landscape can be high. Once the VRM class is determined for a tract of BLM-administered land in the RMP, BLM policy requires that proposed management activities on that tract, such as constructing and operating energy facilities, must meet the requirements of the VRM class.